To develop the entrepreneurial potential of Granada’s BioHealth sector, an objective of the BioALL project
17230
post-template-default,single,single-post,postid-17230,single-format-standard,bridge-core-1.0.4,ajax_fade,page_not_loaded,,overlapping_content,transparent_content,qode-theme-ver-18.0.8,qode-theme-bridge,disabled_footer_bottom,qode_header_in_grid,wpb-js-composer js-comp-ver-5.7,vc_responsive

To develop the entrepreneurial potential of Granada’s BioHealth sector, an objective of the BioALL project

08 Jun To develop the entrepreneurial potential of Granada’s BioHealth sector, an objective of the BioALL project

Posted at 10:22h in Uncategorized by admin 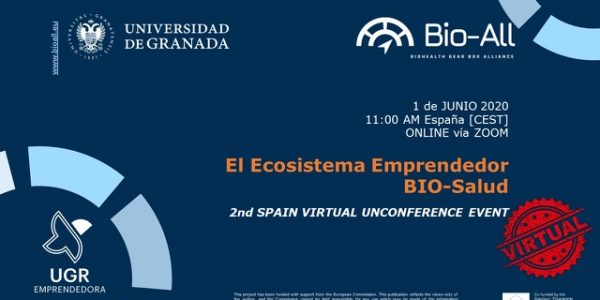 More than forty participants have gathered virtually in an “unconference” promoted by the University of Granada, within the framework of the BioHealth Gear Box Alliance (BioALL) project, in order to discuss about the challenges faced by the entrepreneurial ecosystem of the BioHealth sector and the possible strategies and lines of action to consolidate Granada as an international reference in the sector.

The event was introduced by Pedro Mercado, Vice-Rector for Institutional Policy and Planning at the University of Granada, Virginia Fernández, Territorial Delegate of Employment and Economy in Granada of the Andalusian Regional Government and Ana Agudo, Managing Director of the Andalusian Public Foundation Health Technology Park (PTS). The three highlighted the great potential of Granada, its University, and the ecosystem created around the PTS to be the seed of many companies in the health sector that provide quality of life in an international context. “Granada provides many assets to boost this sector as one of the engines of our economy”, in the words of the delegate of Employment and Economy, Virginia Fernandez. In this sense, Ana Agudo stressed that the COVID19 pandemic has given the opportunity to “turn the province into a productive hub in the field of biotechnology and health sciences, as Granada was the territory where the most initiatives both at business and research level were presented in the recent call for COVID19 projects by the Andalusian Government”.

María del Mar Fuentes, director of Entrepreneurship of the University of Granada, presented the participants the objectives and first results of the BioALL project. She highlighted that one of the most important deficiencies detected at a European level in an extensive survey that was conducted among universities, companies, accelerators, incubators and other key actors of the BioHealth ecosystem is the “lack of structured entrepreneurship courses for students and professionals in the BioHealth sector”.

One of the project results is an International Joint Post-graduate in “Advanced Skills for BioHealth Entrepreneurship and Innovation”, that will be offered by the three academic partners of the BioAll Project, and more specifically at the University of Granada if will be offered next academic year as a Master’s Degree in BioHealth Entrepreneurship and Innovation. Its academic content and international mobilities were presented by the master’s director-coordinator Javier Melero. Lourdes Núñez, director of Knowledge Transfer, Internationalization and Entrepreneurship at PTS Granada, presented the current situation of the International Joint Acceleration Program of BioHealth Companies, another outcome of the BioALL project, whose call for participation is scheduled for early 2021.

After the presentation of the project and its results, the attendees were divided into five virtual panels, that were moderated by experts in the following topics: María del Mar Fuentes (UGR Emprendedora), in BioHealth Entrepreneurial Ecosystem, Carolina Martín (BIC Granada) in Aceleraction of BIOHealth companies, Lourdes Núñez (PTS) in Projects Financing, Juan José Díaz-Mochón (DestiNA and UGR) in International Development of BIO companies and Pablo Caballero (president of the Health Commission in the Cluster On Granada Tech City) in Knowledge Transfer between Companies and Universities. 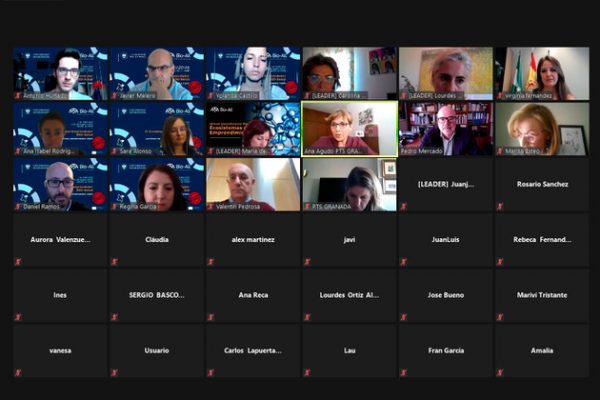 These panels were the core of the unconference and allowed participants to share their impressions, put forward problems, challenges and strategies for the development of the BioHealth entrepreneurial ecosystem in Granada. In this type of unconference, it is the participants who define the content of the final conference or round table.

The conclusions or highlights of each panel were presented in a final session by the experts. With respect to the entrepreneurial ecosystem, it was clear that there is a need to touch upon the coordination between all the agents, establishing connections between local projects and also at an international level, focusing new projects into the sector demand. It was also stressed that it is difficult to obtain funding both for pilot tests and for projects in their final stages of development, resulting from the lack of an ecosystem with sufficient projects to be attractive for investors.

The final session also dealt with the need to include the role of the business developer in the support structures for entrepreneurs, who can help with the internationalisation of projects by taking advantage of the global nature of BioHealth challenges and the strategic location of Granada, which serves as a bridge between Europe, North Africa and Latin America. Participants also highlighted the need to promote R&D&I transfer, making both companies and the university look outwards and find synergies, for which Granada has optimal conditions.

The characteristics of the BioHealth sector are risky and such project have a very long development time which requires highly professional companies and very well-trained managers. According to the participants in the conference, it is essential to offer affordable spaces for companies in the early stages development, to avoid the flight of intellectual and economic capital to other provinces or regions that attract projects in the seed phase with very attractive economic and infrastructure conditions.

At the closing of the event, both María del Mar Fuentes and Vito Epíscopo, On Granada Tech City Secretary, highlighted that the BioALL project “has joined the University of Granada, the Health Technology Park and the On Granada Cluster in a common project, which will undoubtedly benefit the entire economy of Granada”.

This website uses cookies to improve your experience while you navigate through the website. Out of these, the cookies that are categorized as necessary are stored on your browser as they are essential for the working of basic functionalities of the website. We also use third-party cookies that help us analyze and understand how you use this website. These cookies will be stored in your browser only with your consent. You also have the option to opt-out of these cookies. But opting out of some of these cookies may affect your browsing experience.
Necessary Always Enabled
Necessary cookies are absolutely essential for the website to function properly. This category only includes cookies that ensures basic functionalities and security features of the website. These cookies do not store any personal information.
Non-necessary
Any cookies that may not be particularly necessary for the website to function and is used specifically to collect user personal data via analytics, ads, other embedded contents are termed as non-necessary cookies. It is mandatory to procure user consent prior to running these cookies on your website.
SAVE & ACCEPT